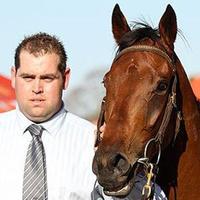 Marcus has been surrounded by racing his entire life, his Father was a trainer and his Mother has worked with some of Australia's biggest Studs so the chances of Marcus persuing a career in Racing were always high.

Over the years Marcus has gained much experience through working with not only his Father, which he did straight from school but also with Arrowfield Stud. He spent 12 months with Arrowfield Stud and it was a huge learning curve for the then 16 year old. At 17 Marcus started his own Bloodstock business which saw him buy and sell tried racehorses within Australia and overseas. For somebody so young he certainly showed alot of drive and determination to succeed. His business was new and he needed to suppliment his wage so he worked for studs in the Hunter Valley area and then worked at the Scone Veterinary Hospital.

In the meantime his Father had moved his own training base to the Hunter Valley Region and it wasn't long before his son joined the team yet again. In September 2006 Marcus took out his licence to train, he started off by training one horse which he owned in partnership with his farrier and he based himself at Muswellbrook where he had an 18 stable complex and was also lucky enough to train from a private property called Winfora Lodge, consisting of 20 stables, grass day yards, horse walker, equine pool and a 1400m all weather track with an incline in the straight.

He remained there for 4 years tasting success on the metropolitan, provincial and country tracks including winning the 2008 Dubbo Gold Cup with Phantom Thief and also the 2009 P.J. Bell Championship at Randwick with Carrizo Creek who was also placed in races on Derby and Cup day at Randwick.

Marcus then decided to relocate his training business to his home town of Inverell, northern NSW. Inverell was a good move as it allowed him to cover more meetings and sneak across the border when required.

In February of 2012 Marcus loaded up 8 of his horses which were up racing and headed to Caloundra where it was to be a 2 week visit but after training a dozen winners on the metropolitan and provincial circuits in such a short space of time he decided that he'd stay a little longer. After thinking long and hard, Marcus decided Queensland was more suitable for him and his growing business. He has taken residency on the Gold Coast which gives him the best of both worlds. Magic Millions is on his doorstep, Doomben and Eagle Farm is an hour away and having several horses that are eligible for the Bobs Bonus it makes it easy to cross the border into NSW whenever needed.