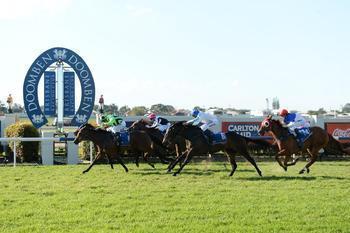 Sunset Showdown saluted first up from a spell today at Doomben in the Carlton Mid Class 3 Handicap over 1000m.

Jumping from barrier 3, Jim Byrne positioned him just behind the speed before exposing him in the straight to find the line well to win by a nose.

Sunset Showdown won a trial by 7 lengths at Deagon 8 days earlier in preperation for this race first up.

Last prep he finished a half length second at Doomben on a Saturday to Black Magic, who since won a Listed race over there carnival, so he was always going to be hard to beat first up in a race like this.

Sunset Showdown takes his record to 4 wins and 4 placings from only 13 starts.