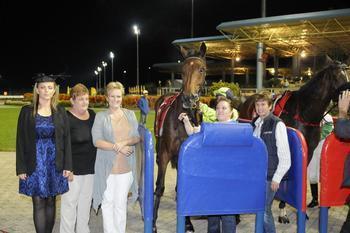 Tiger Bassie had to fight hard to win the Heinrich Constructions Class 1 Handicap over 1300m at the Sunshine Coast last night.

Ridden by Adrian Coome, Tiger Bassie was given a gun ride by Coome, settling fourth one out one back from barrier five.

Shortly after entering the home straight, Coome peeled her off from behind the leaders to go down in a fighting finish to hold off the Tony Gollan trained Saddleback by a nose on the line.

It was a tough, fighting win, she had to dig deep when it counted.

Tiger Bassie was having her third run back from a spell after having no luck second up at Ipswich when finishing 7th and only beaten 1.3 lengths from the winner.

Tiger Bassie was only having her 5th start since joining the Wilson stable.

Congratulations to owner Kirston Butcher and her trainer Marcus Wilson who also is involved in the ownership.