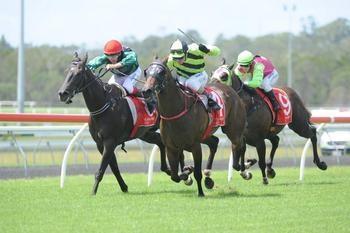 Desert Playboy topped off a great weekend for owners Helen and Tony Yeates after he won the class 2 handicap over a 1000m at the Sunshine Coast on Sunday.

Ridden very patient by Michael Cahill, Desert Playboy settled mid field during the run, cuddled into the straight a run came between two horses but closed quickly, Cahill didn't panic and just bit his time until the run came again at the furlong mark where Desert Playboy took the split to win comfortable on the line.

Desert Playboy was on the week back up after an unlucky third at the Sunshine Coast where he drew barrier 14 and raced four wide the whole race.

Since joining the stable of Marcus Wilson, Desert Playbly has had four start for one win and two placings.

Helen and Tony Yeates also race the ultra consistent Sunset Showdown with the Marcus Wilson Stable who ran an impressive half length second at Doomben when taking on Saturday class for the first time.