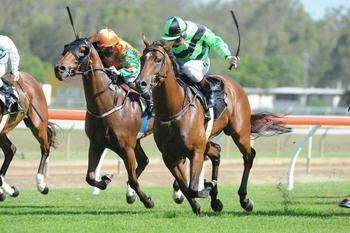 Sunset Showdown proved too classy for his rivals on Friday at Ipswich winning the colts and geldings class 1 Channel 7 handicap over 1100m.

Ridden by Jim Byrne, plans went out the window shortly after the start when Sunset Showdown got knocked down and went straight back to last. Mid race Byrne let Sunset Showdown slide forward before slotting in midfield.

Carrying top weight of 59kg, Byrne popped him out into clear running room at the top of the straight and he finished strongely to beat the favourite Red Eric by three quarters of length on the line.

His trainer Marcus Wilson described it as a "super tough win" considering the interferance at the start and also to carry 59kg over 1100m around Ipswich.

Owned and bred by Mrs Helen Yeates, Sunset Showdown is starting to build a nice record winning two races and a second placing from only 6 starts with $23,500 prizemoney.