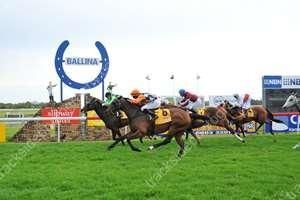 “He’s a big horse and he got rolling at the right time,” Wilson said.

“He weighs about 530kg and he’s a typical stayer.

“This might give him a bit of confidence; he had some problems before I had him and he was out for about 12 months.”

“I gave him a good nudge out of the gates today,” jockey Ryan Wiggins said.

“He pressed forward and I had to give him a breather before we took off.

“I think the shades really helped and he did well when we got up there.”