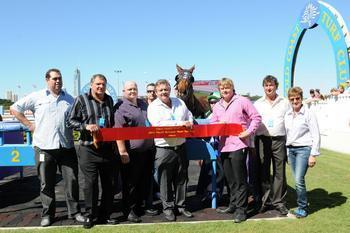 Yarrandi displayed a great performance to win the Macprint Maiden Handicap over 1400m at the Gold Coast on Saturday.

Given a ten out of ten ride by leading Gold Coast apprentice Travis Wolfgram, Yarrandi had the box seat run from barrier two before poping off the fence in the straight and driven to the lead to win by half a length.

It was a tough win, he got a bit lost when he hit the lead and lost sight of his rivals, but he fought on well right to the line. That win will boost his confidence. ''Wilson said.''

Yarrandi was unlucky not to win his first start for the new stable after running 3rd out of 15 runners in a $35,000 maiden at Eagle Farm last start after a tough run from a wide barrier.

He has now had two starts for a win and a placing for his new trainer and owners.