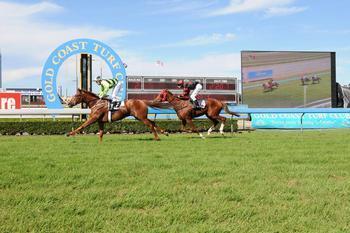 Prize topped of a fantastic two days for owner Rahd Barry and his trainer Marcus Wilson after winning the 2200m maiden at the Gold Coast today.

Capped off with a beautiful ride by Jackson Morris, Prize settled off the speed back second last and done his best work late to score a soft win on the line by a length.

It was a great win with 57kg, third up from a spell off a three day back up after running a nice fifth on the Wednesday coming from last over 1800m.

Prize is a 3yo gelding by Reset out of Violet Lane, a black type english staying mare by Danzero who also won over 2200m in France.

He was the second winner in two days for owner Rahd Barry after Goth Girls impressive debut win at Ipswich yesterday.