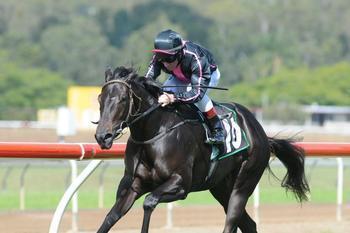 Goth Girl opened her account on debut today at Ipswich scoring an impressive win in the Sky Racing maiden plate.

Ridden by Jim Byrne, Goth Girl only began fair from barrier one but gathered speed quickly to drive through and position her self in the box seat. Approaching the home turn she railed like a greyhound and kicked clear in the straight to win easily by a length and half.

It was an amazing effort for the two year old filly by Rakti to beat the older horses on debut. She ran 45.82 seconds for the 800m assignment and running her last 600m in 33.48 seconds on a dead track, point three of a second outside the class record.

Goth Girl is owned by Rahd Barry and her trainer Marcus Wilson.

She was purchased from the Adelaide Magic Millions yearling sale last year.