ANOTHER VICTORY FOR SUNSET SHOWDOWN 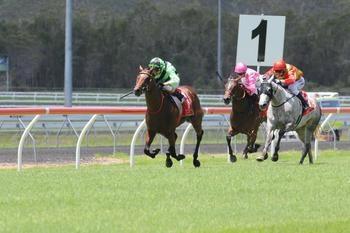 Sunset Showdown is starting to boost a very impressive record after winning the Bolack Publications Class 2 Handicap over a 1000m at the Sunshine Coast on Sunday.

Ridden to perfection by Michael Cahill, he parked him travelling just behind the leaders and cuddled him into the straight before letting him cruise to the front at at the final furlong mark to win easily by 2.3 lengths.

He was unlucky last start at Doomben finishing third after having a tough run.

Starting from barrier 2, he was always going to get the run of the race and be hard to beat.

It was a very soft win in the end, Cahill only touch him once or twice with the whip.

Owned and bred by Helen and Tony Yeates, Sunset Showdown has won two of his last three runs and his overall record is now 3 wins and 2 minor placings from only 8 career starts.