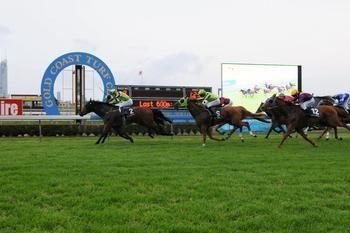 Feltham earned a just reward for his remarkable consistency with his hard-fought win in the Assured Mortgage Fund Class 1 Handicap (1400m) at the Gold Coast.

Gold Coast trainer Marcus Wilson has worked wonders with Feltham since the gelding arrived from Victoria with just two minor placings to his name from 10 starts.

Wilson has turned Feltham into a solid performer capable of earning a cheque for connections every time he stepped out.

The son of Fubu’s win at the Gold Coast was only his second from 13 starts for Wilson but Feltham had finished second seven times, going down in a photo in quite of few of those races.

Feltham had recorded minor placings at all three of his spring runs before his latest victory. The gelding had finished second in Class 3 company first-up before posting yet another second in Class 2 grade two starts later.

Wilson dropped Feltham back to Class 1 company for his latest race and sent the six-year-old over 1400 metres for the first time in his current preparation.

The move paid dividends as Feltham jumped smartly to settle outside the speed for jockey Daniel Griffin before he was left in front when the leader began to tire at the 300 metres.

Feltham found a length at the 200 metres, which proved to be just enough over the final stages as he fought hard under Griffin’s urgings to score by a nose carrying 59kg from Faith No More, who enjoyed a 2kg weight advantage.

Feltham earned a $6,500 winner’s cheque for connections, taking his prizemoney tally to more than $35,000.